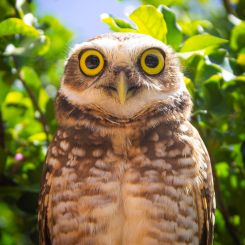 The wisdom of animals runs like a thread through human history. Since Classical Antiquity, poets have been writing odes. The philosopher Hegel once spoke of the Owl of Minerva, who spreads her wings at dusk. Hegel meant that true wisdom only flies up at the end of the day. After the events of the day have taken place. You need to get a new perspective in order to see, fathom and solve any problem.

In these Online Energizer, we use the role of birds and other animals to come up with new insights. Imagine that you are a bird, and brainstorm from an entirely different perspective. Indeed, take a bird’s perspective (or a frog’s perspective!) You’ll find  out that when you employ a different mindset, and tap into your creative imagination, you’ll come up with new ideas. Fly along on our metamorphosis!